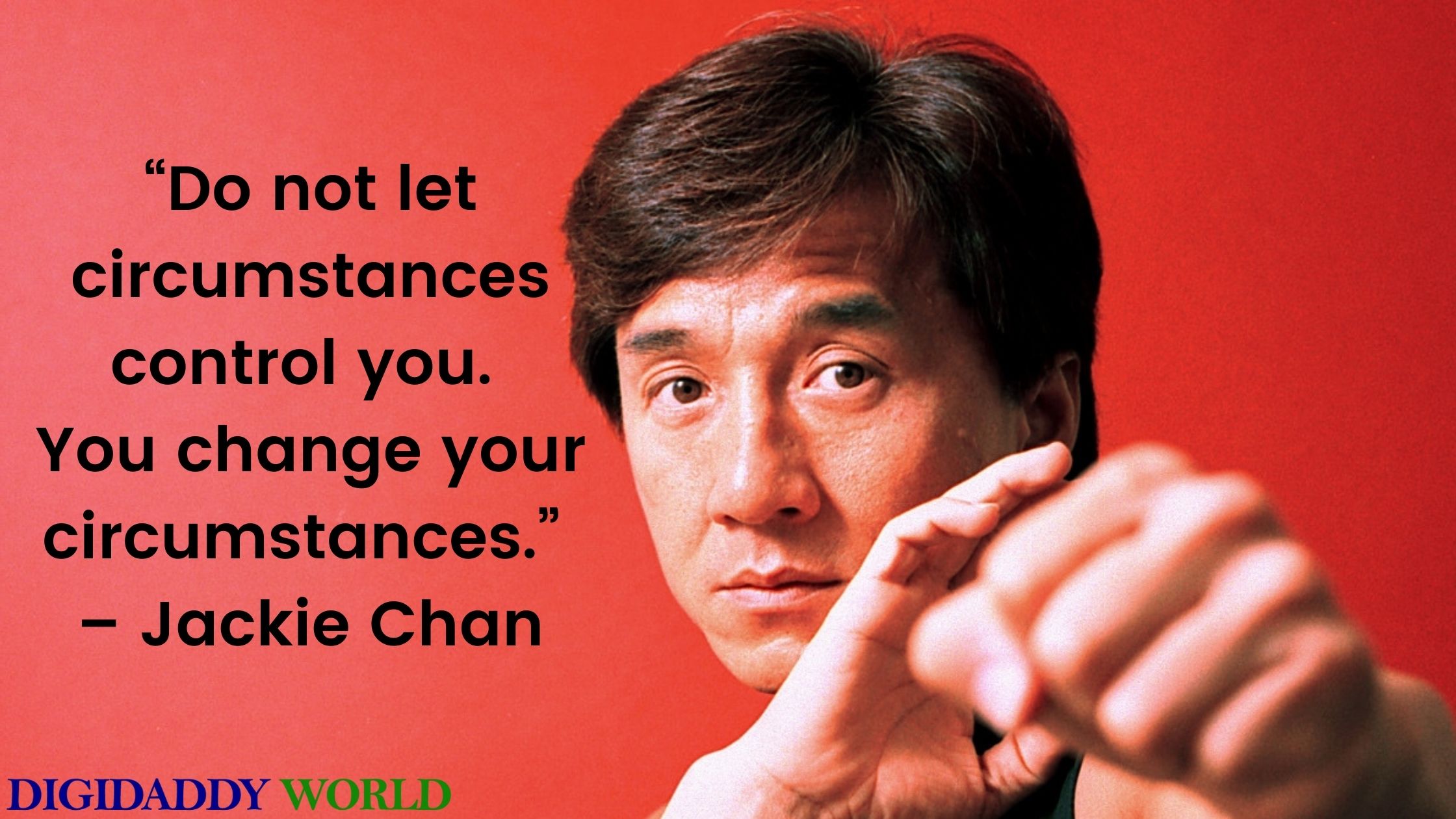 These Jackie Chan quotes will inspire you to work hard to reach your full potential.

Jackie Chan was born on 7 April 1954 is a Hong Kong actor, director, and martial artist. Jackie Chan is his professional name. He was born with the name Chan Kong-sang but his real name is Datuk Fang Shilong. He is famous for his fighting style, comic timing, and the stunts that he performed by himself.

Jackie Chan has done more than 150 films and is considered one of the most popular action film stars of all time. At the start of his career in the 1960s, he faced a lot of difficulties at that time when he was marketed as the next Bruce Lee.

Some of his famous movies include Rush Hour, Drunken Master, Police Story, and The Foreigner. You can find the perfect combination of action, comedy, and drama in his movies.

Here we are sharing a collection of Jackie chan motivational quotes and sayings for you to find out some more about the world-famous action film star.

“I do small things. I try to do good things every day.” – Jackie Chan

“Cinema reflects the culture and there is no harm in adapting technology, but not at the cost of losing your originality.” – Jackie Chan

“Now I am older, I understand we have to accept who we are.” – Jackie Chan

“Speaking English is like tongue-twist for me. I can speak each word perfectly, but then you have to string them together like, ‘Blah, blah, blah.’ That’s when I get crazy.” – Jackie Chan

“Before I do a stunt, I have to make sure it is safe.” – Jackie Chan

“American stuntmen are smart – they think about safety. When they do a jump in a car, they calculate everything: the speed, the distance… But in Hong Kong, we don’t know how to count. Everything we do is a guess. If you’ve got the guts, you do it. All of my stuntmen have gotten hurt.” – Jackie Chan

“Don’t try to be like Jackie. There is only one Jackie. Study computers instead.” – Jackie Chan

“When you are learning about a martial art, it is about respect.” – Jackie Chan

“I know I have to run 20 more minutes if I eat ice cream. Basically, I eat everything, but I just do more training.” – Jackie Chan

“I’m good for some things, bad for a lot of things.” – Jackie Chan

“If everyone does some good, think of what a good world this will be.” – Jackie Chan

“I only want my work to make people happy.” – Jackie Chan

“Family isn’t whose blood you carry. It’s who you love and who loves you.” – Jackie Chan

“When I’m making an American film, it’s safer because there are so many people on the set to watch me. Whatever I do, they say, ‘What are you doing!? Tell me first!’ There are so many restrictions.” – Jackie Chan

“My schedule goes: wake up, running, exercise, downstairs, running shoes off, then to the shower. That’s the Jackie Chan diary.” – Jackie Chan

“Most of the time, I’m not even working; I’m just helping people because I feel that I am too lucky.” – Jackie Chan

“Coffee is a language in itself.” – Jackie Chan

“For me, the greatest source of income is still movies. Nothing – stocks, financial speculation, real estate speculation, or businesses – makes more money for me than making movies.” – Jackie Chan

“A lot of people ask me when I do a stunt, ‘Jackie, are you scared?’ Of course, I’m scared. I’m not Superman.” – Jackie Chan

“I’m tired of fighting. I’ve always known that I can’t be an action star all my life.” – Jackie Chan

“If there really is a god, then he really looks after me.” – Jackie Chan

“My dream is to continue filming until my body tells me to stop.” – Jackie Chan

“I allowed myself to be bullied because I was scared and didn’t know how to defend myself. I was bullied until I prevented a new student from being bullied. By standing up for him, I learned to stand up for myself.” – Jackie Chan

“Why did I become Jackie Chan? Mostly because I work very hard. When people were sleeping, I was still training.” – Jackie Chan

“The best fights are the ones we avoid.” – Jackie Chan

“As a father, I always want my son to be perfect. When he was young, I tried to train him in martial arts, but he said, ‘I don’t want to become like Bruce Lee’s son, with everybody telling me how good my father was.’ I just think my son is too lazy.” – Jackie Chan

“Sometimes it takes only one act of kindness and caring to change a person’s life.” – Jackie Chan

“Besides entertainment and action, I want to educate. You know, as a producer or director, we do have a responsibility to society.” – Jackie Chan

“The world isn’t that big, but it’s not that small either, and connections between two human beings are always a little mystical.” – Jackie Chan

“Life will knock us down, but we can choose whether or not to stand back up.” – Jackie Chan

“Nothing makes me more determined to succeed than someone telling me something’s impossible.” – Jackie Chan

“You don’t need a reason to be nice to someone.” – Jackie Chan

“Martial arts is for defense. It’s not for attacking. So when people are fighting, always, always, defend.” – Jackie Chan

“Martial arts is not for hurting people, it’s for protecting people.” – Jackie Chan

“We have to do what we can to help wherever and whenever it is possible for us to help.” – Jackie Chan

“Being a stunt coordinator, I have to take care not only of myself but I have to make sure everyone is safe.”- Jackie Chan

“I really hope someday in Hollywood, some producer or director will hire me only to do drama.” – Jackie Chan

“When I was young I trained a lot. I trained my mind, I trained my eyes, trained my thinking, how to help people. And it trained me how to deal with pressure.” – Jackie Chan

“I prepare for the worst, but hope for the best.” – Jackie Chan

“I’m not young anymore. I’m really, really tired. And the world is too violent right now. It’s a dilemma – I like action but I don’t like violence.” – Jackie Chan

“You don’t get to do over parts or go back and change your path. Your life is decided by your character and the decisions you make in the moment.” – Jackie Chan

“Pain is my daily routine. As long as I don’t go to the hospital, it’s nothing for me.” – Jackie Chan

“Bruce Lee brought the martial arts movie to the attention of the world – and without him, I don’t think that anyone would have ever heard of Jackie Chan.” – Jackie Chan

“It is totally different making films in the East than in the West. In the East, I make my own Jackie Chan films, and it’s like my family. Sometimes I pick up the camera because I choreograph all the fighting scenes, even when I’m not fighting. I don’t have my own chair. I just sit on the set with everybody.” – Jackie Chan

“I loved cowboy movies when I was a kid. When I was five years old, I was already wearing a cowboy hat and suit. When I grew up, I knew John Wayne, Clint Eastwood, Kirk Douglas, and so on.” – Jackie Chan

“If one does not attach himself to people and desires, never shall his heart be broken. But then, does he ever truly live?” – Jackie Chan

“Being still and doing nothing are two completely different things.” – Jackie Chan

“The ads all call me fearless, but that’s just publicity. Anyone who thinks I’m not scared out of my mind whenever I do one of my stunts is crazier than I am.” – Jackie Chan

Jackie Chan is one of the most influential personalities all over the world. Having stars to his name on the Hong Kong Avenue of Stars and the Hollywood Walk of Fame, Jackie Chan has been referenced in various pop songs, cartoons, films, and video games.

As good as he is as a star, he is also good at heart. His name shines under the top 10 most charitable celebrities by Forbes magazine. Professionally trained in Kung Fu, Wushu, and Hapkido, Jakie Chan is the best source of inspiration.

We hope you will enjoy these Jackie Chan motivational quotes and sayings and work hard to reach your full potential.